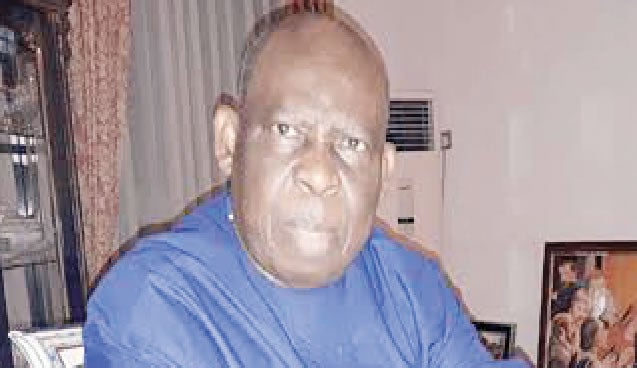 A former Minister of Health, Prof Alphonsus Nwosu, tells RAPHAEL EDE about security, why the security chiefs should be sacked, need for regional security outfits, among other issues

The issue of insecurity has remained a major concern to many Nigerians lately. South-West governors launched Operation Amotekun, while some groups in the North unveiled Operation Shege Ka Fasa. What do you think the South-East should be doing?

Igbo people have had a very bitter experience with regards to loss of lives and property in Nigeria. The present situation presents a new challenge, especially with the infiltration into our farmland and forests.

The Enugu State Government took an initiative then to have Forest Rangers. This and other ideas are being fine-tuned and Igbo elders will work hand in hand with the governments of South-East states as Ndigbo deal with the new challenges. The overall objective is to teach any infiltrator that we know our homelands, forests and farmland better than they do and when Ndigbo are pushed, you can be sure they will react appropriately.

Issues regarding Anti-Grazing Bills and state or zonal security outfits have legal implications and are matters of state governments and state legislatures but Igbo experts have already done their homework on draft laws to deal with these new challenges without copying anybody. After all, when Bakassi Boys acted to curb insecurity and kidnapping, their effectiveness was clearly seen.

How do you think we should tackle insecurity problem in Nigeria, with regards to Boko Haram, banditry, organised kidnapping, and so on?

The duty of securing Nigeria is the responsibility of the Nigerian Armed Forces and the Nigeria Police Force under the Commander-in-Chief. Simple! This is why the Commander-in-Chief and the various service chiefs and the Inspector General of Police are being criticised. It is not personal, political, partisan or religious, it is simply that when the system established for the protection of the lives and property of Nigerian citizens is failing as it is failing in Nigeria, it is natural to call for the resignation of the leaders of the Armed Forces.

Put differently, the answer to system failure is complete overhaul and change of the system management. Those who attempt to make it ethnic, religious or political simply miss the point.  The point is that those charged with the responsibility of protecting the lives and property of Nigerians should do their jobs, period! Too many people have died and are still dying, and internally displaced persons cannot return to their villages to resume their normal lives.

Since your recent call for the sacking of service chiefs has not yielded any result, what will you suggest?

We have done our duty, which is simply to demand that the service chiefs, having failed to give Nigerians adequate protection, should relinquish their positions. Let’s not forget that these service chiefs are already using extra time and how do we know that their subordinates cannot secure Nigeria better, after all, they were appointed because some service chiefs were retired. It is now the duty of the authority to listen to the call or close his eyes and ears to the situation.

Giving your position on Nigeria’s security situation, does it mean you are afraid on the future of the country?

Very much so. Failed states, of which Somalia is the best example, are those states where the security situation has failed irretrievably. When the various zones of Nigeria are as concerned about the state of insecurity the way they are now, every citizen should be worried. I fled the University of Ibadan to the University of Nigeria, Nsukka in 1966 because of insecurity, so I am doubly worried because reflecting on this has shown clearly that if I were Yoruba, Itshekiri, Tiv or Fulani, I would not have fled the University of Ibadan. I know that the late Ken Saro-Wiwa, an Ogoni, fled UI with us to the UNN before he later left for Port Harcourt. This is a serious cause for concern because security transcends our diversity and every Nigeria citizen must feel secure in any part of the country.

Are you saying the present government is not managing our diversity well?

I am saying so and very loudly too. When appointments of service chiefs become skewed to one part of the country, when a zone comprising five states is excluded, when appointments are annoyingly largely made from one zone to the irritation of others as this government has done, it is a complete mismanagement of Nigeria’s diversity.

How do you think we can give everybody and every group a sense of belonging in Nigeria given our diversity?

The simple recipe is inclusiveness and strict observance of the Federal Character Principle. In addition, there are nation-building institutions such as the Armed Forces and the police.  There are Federal Government colleges and there is the National Youth Service Corps, which should be used in a creative and imaginative way to foster national unity. Government should also revitalise National Sports Festival for the same purpose.

How does your party, the Peoples Democratic Party, hope to produce the governor of Anambra State next year, which it has not managed to achieve since 2004?

Anambra State has always been a PDP state and even when we did not produce the governor of the state, we produced the majority of National Assembly members. We know the hiccups that stopped us in 2017, even when we had two senators and majority of House of Representatives’ members. This time, we shall make sure there are no hiccups.

So many people in Anambra are talking about zoning and it will appear that the All Progressives Grand Alliance has already zoned where its candidates will come from. As a member of the Board of Trustees of the PDP, what is the position of your party on zoning?

To the best of my knowledge, my party has not taken any position on zoning. What we are all working very hard to do is to ensure that Anambra State becomes a PDP state completely by having a PDP governor after 16 years. Many of us from Anambra in the party would want to return to the national stage politically by having a governor that belongs to the PDP, which has a national spread. We are not comfortable that of the 36 states in Nigeria, 35 belong to either the PDP or the All Progressives Congress, while Anambra stands alone like a sore thumb.

What the PDP is looking for is to make Anambra State completely a PDP state. In other words, the main objective of the PDP in the state is not zoning but to win.  The 23 aspirants come from the three zones and when it is time, we will ensure that the candidate most likely to win will emerge. One of our major worries is that one year after the presidential election; the amended Electoral Bill has yet to be signed into law by Mr. President. As we prepare for Anambra State governorship election, we shall be conscious of that fact.

It would appear from your answer that your party is unhappy the President, Maj. Gen. Muhammadu Buhari (retd.), has not signed the Electoral Bill and that you will consider this in handling the Anambra issue?

Yes! Before the 2019 general elections, the excuse for the non-signing of the bill was that the time was too close to the elections.  Now, one year after, a bill that was ready to be signed in 2019 is not yet signed.  So my party has reason to be worried.

That’s the general impression people have but let us give due credit to the party for reinventing itself after the catastrophic 2015 general elections.  In case we have forgotten, the party lost the presidency; the party lost most of the state governorships and lost its clear majority in the National Assembly. On top of it, the party suffered the self-inflicted injury of having Governor Ali Modu Sheriff as its chairman. So, to come back from such a position to where the party is, to the point of being convinced that it won the 2019 presidential election, is no mean feat.  Let us also not forget that the party has never been in opposition before and to compound matters, the frequency of APC government’s missteps require constant reactions by the PDP, so as to protect Nigeria’s democracy.

How then do you rate this APC-led Federal Government?

Badly! The most troubling issue is that our debt burden has been worsened and most of the debts go into the budgets.  The second most troubling issue is that so soon after the end of the retired General Sani Abacha regime, for which so much credit belong to the PDP, we are rapidly travelling back on the road to lack of freedom and insecurity. These are the most troubling factors. When you add the limping economy, poor exchange rate of the naira, and so on to it, it is clear that my rating is based on facts.

Why are you certain that the PDP will be better having governed for 16 years before 2015?

The PDP can boast that in 16 years, it nurtured democracy successfully and ensured that succession from a PDP-led government to a PDP-led government and from a PDP-led government to the APC opposition took place democratically and without disequilibrium to the polity.  There was freedom of speech and there was freedom of association.  The social media was unfettered and Nigerians breathed the air of freedom to the maximum. This, to me, is the greatest achievement of the PDP.  The PDP also nurtured the economy to six per cent annual growth rate, especially after the phenomenal debt relief effort. And everybody is now enjoying the use of mobile phones, Twitter, Instagram, Facebook, Whatsapp, etc., forgetting that this was made possible by the PDP government. Let us attempt listing what the APC government has achieved in the five years which is the one-third of the time that the PDP was there and you will see the reason for my optimism that the PDP is the party for national harmony, freedom and economic development.