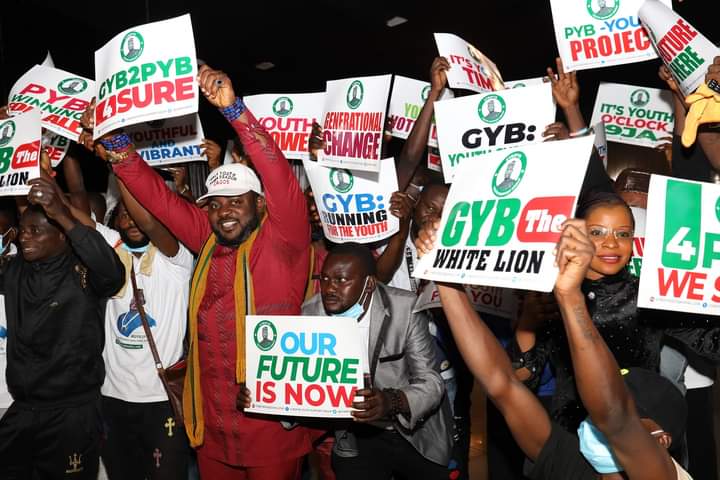 South West youths, on Wednesday, held a big rally in Lagos State, where they called on Governor Yahaya Bello of Kogi State to, as a matter of must, make himself available to run for the 2023 presidential election under the platform of the ruling All Progressives Congress, APC.

The group, operating under the name GYB2PYB Support Group, mobilised thousands of youths across the six states of Yorubaland and some parts of North Central in Lagos.

They stressed that Governor Bello had demonstrated more than enough commitment to good governance in Kogi, adhered to the call for more women participation by appointing more women in his cabinet.

While pointing out that the majority of his appointees were youths, the youths maintained that the Kogi Governor remained the best person to succeed President Muhammadu Buhari come 2023.

Addressing the crowd at the conference on Wednesday, the Director General, GYB2PYB Support Group, Oladele John Niyi, said Governor Yahaya Bello stood out among the present crop of governors in terms of performance and that whenever the issue of good governance in Nigeria was being discussed, “the Governor of Kogi State is second to none.”

John, while appealing to the Nigerian electorate to eschew ethnic, religious and zoning sentiment in the coming general election, said, “GYB2PYB Support Group is an independent youth organisation that has done its separate research on who among the present crops of politicians possess the quality to build on the legacy of the present administration and who also has respect for youth and gender equality.

“The Kogi State Governor is second to none. We are therefore convinced he is the right person to take Nigeria out of its present predicaments after President Muhammadu Buhari.”

He appealed to the governor to as a matter of must accept the clarion call of GYB2PYB Support group on him to run for president in 2023, promising that “votes from the youth and especially women across the country would secure him victory.”

In a special address titled, ‘Towards Youthful Political Consensus and 2023 General Elections’, the guest speaker, Mr Segun Olonode, said Nigeria today requires a candidate with youthful strength and capacity to drive it forward.

He said research had shown that Governor Bello was the only one who had demonstrated enough capacity “from the way he governs Kogi, the way he incorporated youths in his cabinet, how he has given women more than enough space and opportunity to serve under his administration and how he ensures security in Kogi.”

“He can replicate this if he becomes the President of Nigeria,” he argued.

Some of the state coordinators of GYB2PYB Support group from Lagos, Gloria Benson, Ogun; Ambassador Henry Oyebade, Osun; Mrs Yetunde Moradeyo, Asimiyu Arisekola and others urged Nigerians and the leadership of the ruling party to present Governor Bello as the candidate of the party in the next general elections, saying with Bello, the slogan for the 2023 General Election would be ‘Youth O’ Clock’.

The Chief of Staff to the Governor of Kogi State, Pharm. Abdulkareem Asuku, who disclosed he was invited by the youth as a witness to what they had in stock for Governor Bello, said it was his delight that even youths in the Southwest zone acquainted themselves with the marvelous work Governor Bello was doing in Kogi.

According to him, what Nigeria needs, which the incumbent governor of Kogi has demonstrated, is a leader that will unite all tribes, bridge the broken bridge, a detribalised leader that will ensure fairness, justice and equality.

“I can assure you that our governor has done this in Kogi and he will replicate it if supported to become President of Nigeria in 2023” Asuku said.