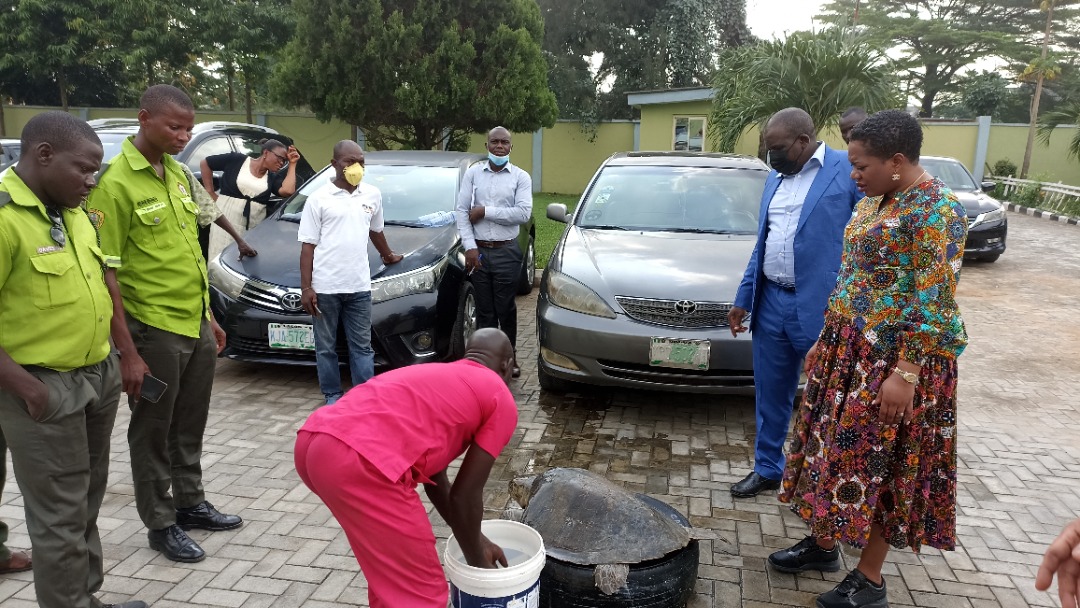 The Lagos State Environmental Protection Agency, LASEPA, has called for collective support against unlawful trade of wildlife, hunting and possession of wildlife parts in other to sustain the ecological balance and prevent extinction of some special animals and plants..

This came on the heels of the recovery of a sea turtle from an illegal, poacher who was arrested by the officials of the Kick against Indiscipline, KAI, Eti-Osa zone.

The General Manager of the Agency, Dr. Dolapo Fasawe expressed concern that ignorance of the general public to the benefits of wildlife is contributing highly to the rate of unchecked illicit trade of the endangered species by few selfish people against the general interest of all.

“Our awareness advocacy recently paid off, as the officials of the Kick Against Indiscipline (KAI) Eti-Osa Zone professionally arrested one Isiaka Muhammad, who confessed to hunting of sea animals at the ocean and selling to awaiting customers.

The sea animal was recovered and later released back home into the ocean at Oniru beach in the presence of our natural resource protection team.” she explained.

According to her, the laws covering the preservation and conservation of wildlife in Nigeria are largely enshrined in two sets of Acts, namely: The Nigerian Endangered Species Act (Control of International Trade and Traffic) Act, Decree 11 of the 1985 Constitution and Section 20 of the National Parks Service Act.

She added that these extant laws in principle regulate the hunting, rearing and trade of animals, as well as set up the various game reserves we currently have in Nigeria including the Yankari, and Borgu game reserves, Okomu and Old Oyo National parks, etc.

She said:”Lagos State is a largely urban setting with the fastest growing population in Africa. The per capita needs such as housing, industrialisation, recreational centres and other amenities pose danger to existence of some special animals and plants with limited availability of land for conservation activities.”

She however, stressed that LASEPA is striving to maintain balance by diligently monitor the effects of these undesirable activities on the environment and also protect our native wildlife population by insisting on a comprehensive Environmental Impact Assessment, EIA, as a mandatory requirement before the commencement of any projects, in a bid to savage our comfort zone.

As a port city, the General Manager maintained that Lagos is vulnerable to illicit trade of these treasured species and therefore; the agency has embarked on aggressive advocacy, improved surveillance and monitoring activities.

“It is worthy to note that peculiarities of wildlife conservation and management require all three levels of government to clearly map and detail policies to prevent trafficking of these precious species through various airports and seaports across the state, therefore, the need to create several layers of policies and checks to protect our precious biodiversity and also ensure that people acts responsibly by totally avoiding poaching, unhealthy gaming and habitation destruction (bush burning, deforestation,” she noted.

“To achieve the Lagos of our dreams, LASEPA remains committed to ensuring fair and responsible use of the environment in the State, by harmoniously working in relationship with other relevant MDAs such as the Ministry of the Environment and Water Resources, Ministry of Agriculture, LASPARK and Ministry of Health to build a holistic framework by which we can adequately protect the precious flora and fauna in Lagos.”

She further stated that LASEPA  has improve its baseline data collection, identification of endangered animal species and protected areas, botanical tagging of special trees/plants in addition to strengthening the policies at State and local levels.

The agency listed the green turtle, African savanna elephant, western gorilla, white bellied pangolin, black rhino and grey parrots as endangered species facing varying threats as a result of unlawful sales, habitat destruction, fashion trend, domestication amongst others. Tree plant such as sandbox tree, pine tree, anta root, cabbage tree, African mahogany and stool wood are categorised as vulnerable by the International Union for Conservation of Nature, IUCN, due to over exploitation and medicinal relevance. Unlike in the past, the population is more aware of the dangers inherent in extinction of conservation wildlife and destruction of protected reserved ecological areas and have being advised to report incidents of poaching or illegal trade to the appropriate authorities for action.

LASEPA campaigns against open market sale of special animals and plants and therefore clamour for self-regulation and discipline against use of force. The existing laws allow for a fine of 5million or one year jail term for the illicit trade of endangered animals in Nigeria.

LASEPA AT A GLANCE