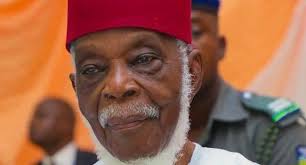 The National Leader of the Pan-Yoruba Socio-political group, Egbe Afenifere, Pa Ayorinde Fasanmi has died at the age of 94.

The Second Republic Senator who was born on the 25th September, 1925 in Iye-Ekiti, Ekiti State, was until his death a Chieftain of the All Progressives Congress, APC.

His death which was announced in a statement signed by his son, Folabi Fasanmi on behalf of the family. He said the nonagenarian passed on peacefully in Osogbo, the Osun State Capital on Wednesday night.

The late Afenifere leader joined the Unity Party of Nigeria, UPN in 1978 and in 1983 was elected member of the Federal House of Representatives representing Ondo North.

He later served as the National Vice Chairman of the Alliance for Democracy, AD, Southwest zone, in 1999.