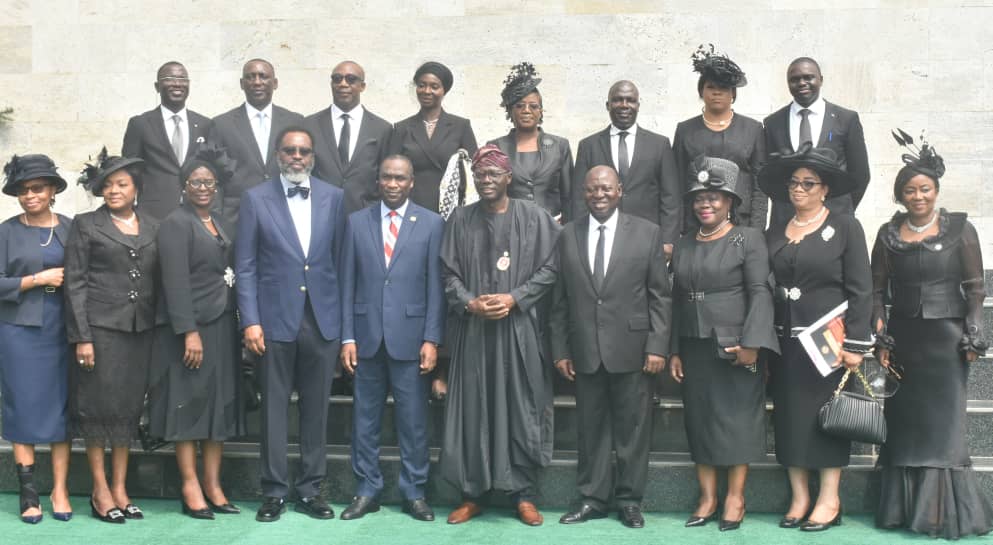 This makes the current number of judges a total of 70 in the State High Courts, consisting of nine females and five males.

During the swearing-in ceremony, the governor said that all eyes would be on the new judges to dispense justice speedily, fairly and impartially, while also living above board in all.

While swearing-in the 14 new judges at the Lagos House Ikeja, Governor Sanwo-Olu said the judicial arm of government is an essential element for the proper and effective functioning of any democratic society, also noting that without the honest interpretation and application of the laws of the land, society would be open to chaos.

The governor said his administration remains committed to supporting the judiciary to fully discharge its constitutional functions and responsibilities, adding that his government is greatly fortunate to be an inheritor of a great tradition of judicial reforms and excellence in Lagos State.

The governor advised the judges, “The standards of behaviour and practice expected of Judges are among the highest and most stringent in the land. All eyes will be on you to dispense Justice speedily, yet fairly and impartially. You will be expected to live and act above board in all circumstances.

“In your hands lies great power: the power to punish wrongdoers and free the innocent, the power to send a strong message to society about the supremacy of the rule of law, and to contribute to the growing body of jurisprudence in the country.

He also urged the them to be committed to their constitutional duties, as he said: “Judges who take their work seriously can do a lot to rebuild the confidence of citizens in the systems and institutions of our nation. A properly functioning judicial system will also go a long way in nurturing an environment that enables business and investment, and by extension, economic growth, and prosperity. When society prospers, there is less room for poverty to drive people to crime and criminality.”

Governor Sanwo-Olu disclosed that his administration had commenced the full digitisation of courts to ensure speedy administration of justice and therefore charged the new judges to make every effort to acquaint themselves with the ongoing reforms being pursued at sub-national and federal levels; be enthusiastic about their use of new technologies and strive to always be forward-looking and innovative in their thinking.

He said: “We have now commenced the full digitisation of our Courts’ system in Lagos State. The first phase, comprising 10 Courtrooms, is nearing completion. This digitisation will help speed up court processes, enable the easy documentation and publication of accurate court transcripts, and also provide high-speed internet access for the use of judges and other judicial personnel.

“Also, very importantly, we are deploying infrastructure to enable the virtual hearing of cases. This is one of the reforms whose necessity has been accelerated by the emergence of the Coronavirus pandemic. We are all witnesses to how the lockdowns and restrictions occasioned by COVID-19 negatively impacted the administration of criminal justice.

“Technology has offered a way out, and we are enthusiastically embracing this option. With the infrastructure we are putting in place, judges will be able to sit virtually, ensuring that there are no delays, while also helping manage the costs that traditionally went into ensuring that suspects are conveyed to and from courts.

“In addition to the pandemic, last year’s wave of arson and destruction that targeted critical government facilities, including our courts, also demonstrated to us the importance of quickly transitioning from manual recording systems to digital ones, which allow for easier and more secure storage of documents and records.”

The Governor also commended the National Judicial Service Commission for adding to the list of 12 prospective judges earlier sent.

Speaking earlier, Lagos State Commissioner for Justice and Attorney-General, Mr. Moyosore Onigbanjo (SAN) said the appointment of the new judges was necessitated by the retirement of some judges in the course of the year.

In his remarks, the Chief Judge of the State, Justice Kazeem Alogba advised the new benchers whom he said were chosen based on merit to operate with the fear of God.

“You are welcome to the judiciary of excellence. It is a family of integrity and a family of discipline. You have all been called up to duty on merit and integrity, please do not disappoint us,” he appealed to the new judges.

Justice Alogba also advised the families of the new judges to leave them to work and to continue to pray for them so that they would not falter.

Expressing appreciation to the State Government on behalf of the new 14 judges, Justice Olubusola Okunuga acknowledged the confidence reposed in them and promised that they would make Lagos State Judiciary proud by discharging their duty without fear, favour or affection.